What is it about Pandas? These cute creatures have an effect on people that only the most flint-hearted could resist. Whatever it is, for anyone visiting Chengdu in Sichuan, a trip to the Giant Panda Breeding Research Base is an absolute must. Here’s a (very) rare opportunity to get a close-up view of both giant and arboreal red pandas outside of a zoo. Unlike many zoos, especially in China, this is a genuinely pleasant place, both for the visitors and the residents, with good information for the humans and large, well-maintained spaces for the animals. The base is committed to preserving this endangered species and is home to over 100 Giant Pandas and more than 70 Red Pandas. 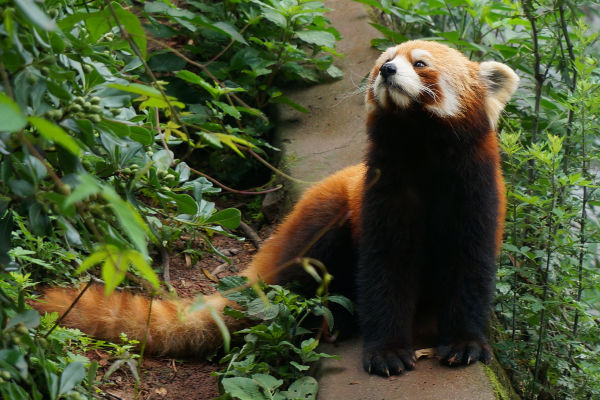 Your visit will start in the morning when the pandas are most active and feeding. Later on, after chomping their way through piles of bamboo, they resort to their favourite pastime – sleeping. Sometimes, especially during the height of summer, they’ll disappear for a doze in their air-conditioned living quarters. It’s important to remember that this is a research centre, so, unlike a zoo, it does not focus on displaying the animals.

Pandas are a puzzle. Besides their oddly endearing appearance, this bearlike creature has a carnivore’s teeth and a vegetarian diet to which its digestive tract is poorly adapted. Then, there is the famed reluctance to do what comes naturally, further limiting their capacity to reproduce. Their numbers have probably never been great, their rarity compounded by a combination of human encroachment and the vagaries of their preferred food, bamboo.

This combination of oddity and scarcity has turned the Panda into a vital asset for China in its dealings on the international stage. “Panda Diplomacy”, the Chinese policy of sending pandas as goodwill gifts to other nations, is thought to have started as far back as the 7th century Tang dynasty. In modern times it was revived in the 1950s under Chairman Mao, and made global headlines after President Nixon’s landmark trip to China in 1972, which ended decades of isolation and tension between China and America. When the 18-month-old pair Hsing-Hsing and Ling-Ling arrived in the U.S. as a gift from Chinese Premier Zhou Enlai, “Panda-Monium” broke out and the two celebrities received 20,000 visitors on their first day in Washington DC’s National Zoo. Since 1984 the policy has shifted to loaning out the pandas in exchange for an annual fee which would help to fund the conservation efforts. More recently, it seems that panda loans have coincided with important trade deals for valuable resources and technology. Chinese leaders are acutely aware of their cuddly mascot’s value, and they are not in the least bit coy about their panda diplomacy. In 2013, Cui Tiankai, the Chinese Ambassador to the United States, wrote in a piece for the Washington Post that “There are actually two Chinese ambassadors in Washington: me and the panda cub in Washington Zoo.”

In Pursuit of Pandas