Forbidden City, also known as the Palace Museum, lies in the centre of China’s capital Beijing. Closed to the outside world until 1925, it is one of the most astonishing and unmissable tourist attractions in the world.

Constructed between 1406 and 1420, Forbidden City was the Imperial Palace for 24 Ming and Qing emperors until 1912, when the Qing dynasty was ousted and the imperial era ended. In those 500 years it was forbidden for ordinary people to enter its gates without special permission, hence its name. In 1925, members of the public were allowed to enter for the first time. Now, it welcomes around 15 million visitors every year!

Forbidden City covers some 74 hectares – roughly twice the size of the Vatican – and consists of 980 buildings surrounded by a 17-metre-wide moat and a 10-metre-high wall. Legend has it that there are 9,999 rooms (the number 9 represents longevity) but the actual total is 8,707. 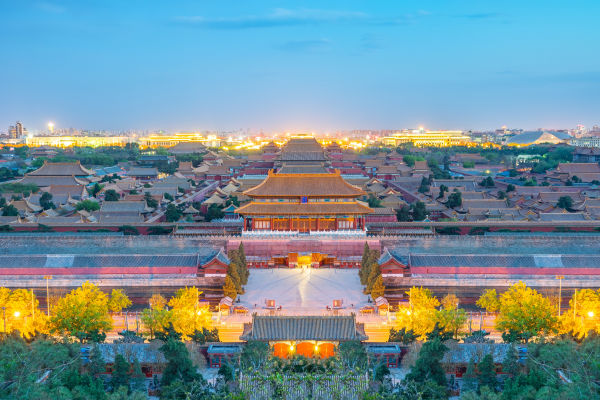 Constructed to project the emperor’s connection to heaven, Forbidden City was designed to be a small model of the cosmos. The buildings face south in accordance with feng shui principles, and most have yellow tiled roofs – yellow being the symbol of the Chinese Imperial family. The main structures stand on a foundation of crisscrossing bricks to minimise possible earthquake damage – one of many examples of architectural ingenuity. Some scholars estimate that over two million labourers and craftspeople took part in building the great palace. In 1987 it was declared a World Heritage Site by UNESCO.

Forbidden City’s Palace Museum houses some of the most impressive jewellery and art in all of China, whilst the decorative splendour and architectural beauty are quite breathtaking. Here are three of the many highlights you’ll see on your visit:

Take a deep breath as you enter the largest, tallest and most magnificent building in Forbidden City. The interior is dominated by six huge gilded columns coiled with dragons, the symbol of the emperor. On a raised platform sits the golden imperial throne of 24 emperors, regarded as the centre of the Chinese universe. In this awe-inspiring hall, emperors were married, enthroned, celebrated New Year and dispatched generals to fight. On the ceiling you will see two dragons playing with pearls painted with mercury. If a usurper sat on the throne, a pearl would drop down and strike him dead.

The most important building in the Inner Court, this is where the emperor lived, slept and handled government affairs. In the centre of the hall is a square platform with a throne, the emperor’s desk and an ornate dragon screen. The throne is inlaid with rubies and emeralds and has gilded handles designed to look like coiled dragons. After emperors died they were laid in state here. The Palace of Heavenly Purity was built in 1420, but had to be rebuilt after a destructive fire.

The smallest of the Three Great Halls of the Outer Court, this square structure is built like a pavilion, with five bays along each side. There is a throne room here where the emperor gathered his thoughts, prepared elegiac addresses, donned ritual clothing and rested before going to the Hall of Supreme Harmony to perform his duties. To get the emperor in the proper mood for those duties, incense burners surrounding the throne were lit. Then he would be conveyed by eight men on one of the 250-year old sedan chairs on display.

Splendours of China by Rail