It’s quite an accolade to live up to, but 700 years on, this city in the eastern Zhejiang province makes a good attempt to do just that. Hangzhou’s claim to paradise has always been centred on its delightful West Lake (Xi Hu) – the centrepiece of every tourist itinerary, and for good reason. Impeccably landscaped and almost poetic in its beauty, this stunning UNESCO World Heritage Site sprawls over an expanse of 1,404 acres, surrounded on three sides by verdant hills and fringed with willow, plum and peach trees. The lake’s islets and temples, pavilions and gardens, causeways and arched bridges have provided the supreme example of lake landscape beauty since the Tang Dynasty. Originally a marshy lagoon separated from the sea by a build-up of silt, it was dredged by the governor of Hangzhou in the 8th century. As time passed, the lake’s splendour was gradually cultivated: gardens were planted, pagodas built and causeways and islands were constructed with dredged silt. As you gaze upon the lake and its surrounding hills, you’ll understand immediately why it’s been the source of inspiration for artists, poets, and philosophers throughout Chinese history. 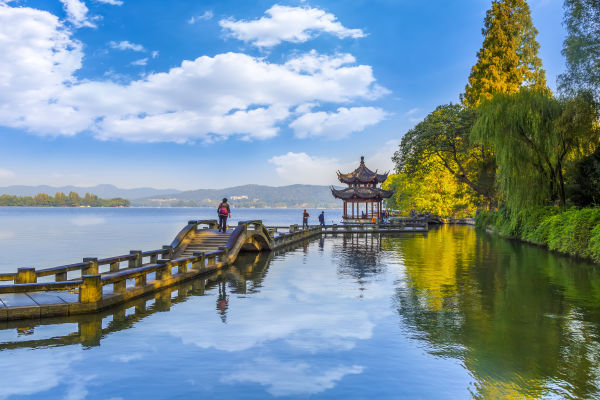 West Lake isn’t the only feature in Hangzhou to detain visitors. Just south of the city on a hill above the Qiantang River is the amazing Six Harmonies Pagoda. This 7-story tower, which looks deceptively taller than its actual 60 metres, was built in 970 AD to ward off evil spirits believed to be responsible for the dangerous tidal bore that thunders up the river twice a day. This extraordinary piece of architecture provides an ingenious optical illusion. From the outside, the pagoda appears to have 13 stories. Once you step inside, however, you’ll find the spiral staircase only leads to seven floors! Whatever, the vista from the top is worth the effort, with stunning views of the river, the Qiantang Bridge and the surrounding city.

Talking of the city, a great way to get a flavour of ancient Hangzhou is to take a stroll down Qinghefang Old Street. This bustling (let’s be honest, crowded) pedestrian street dates back to the Song Dynasty when Hangzhou was the capital city. Nowadays it is the only well-preserved ancient street, with makeshift puppet theatres, teahouses, gift and craft stores and street food stalls. It’s also home to several traditional medicine shops, including the Huqingyu Tang Chinese Medicine Museum which is also an actual dispensary and clinic.

So, whether you come away from Hangzhou agreeing with Marco Polo’s assessment or not, one thing is for sure: this is currently one of the most dynamic cities in China, no longer deserving the title of Shanghai’s backyard. In 2016 the G20 Summit was hosted here – the first to be held in China – thrusting the city onto the global stage and giving it new hotels and a shiny new metro in the process. Maybe, just maybe, now is the perfect time to visit before over-development diminishes the attraction.