It is the world’s third longest river, stretching nearly 4,000 miles from Shanghai through China’s heartland. The Yangtze – sometimes called the “Yellow River” – is China’s lifeline. It runs through 18 provinces and cities and is regarded as dividing China roughly into North and South. Whilst the longest navigable journey of 1,400 miles takes the best part of two weeks, the most interesting and popular Yangzte River cruises (ours included) are three or four night trips between Yichang and Chonqing, taking in highlights such as the Three Gorges Dam and the Fengdu Ghost City, among others.

Your cruise will set sail from Yichang to reach the first excursion at the Three Gorges Dam. The dam project, along with the amazing Five-Step Ship Lock, is an extraordinary feat of engineering and the largest hydropower resource in the world. It was started in 1991 and completed in 2009 – though Chinese leaders had cherished the idea ever since the 1920s. It brings huge benefits in all aspects of flood control, power generation, shipping navigation and tourism – though as with any such project on this kind of scale, it also generates a fair degree of debate around environmental and ecological issues. But there can be no argument about the brilliance of the engineering, especially in the construction of the Five-Step Ship Lock. Construction of the dam meant that ships must be lifted or lowered over 300 feet. The water pressure would be far too great for a single lock gate to withstand. Instead, two sets of staircase locks (one down, the other up) complete the task of raising or lowering in five 65ft stages. It’s like a giant ship elevator, capable of raising a 14,000 ton passenger liner! 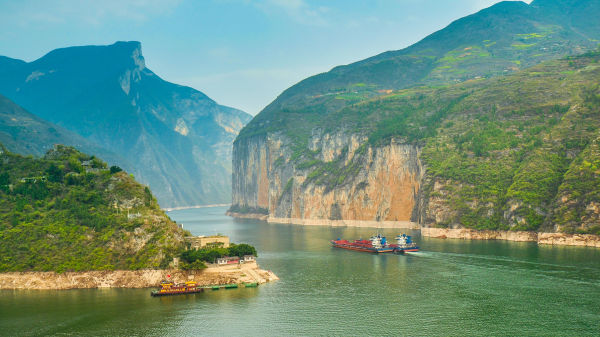 The Three Gorges themselves provide another scenic highlight of the trip. The first one you’ll sail past is Xiling Gorge, the longest of the three at 47 miles. Stretching from the mouth of the Xiangxi River in the west to Nanjinguan Pass in the east, it winds through some spectacular canyons. Next comes Wu Gorge, the prettiest of the three, known as “Witches Gorge” because of its depth and twisting nature. And finally, the shortest of the three at 28 miles long in Qutang Gorge, known locally as “wind box gorge”. The most dramatic of the three gorges, it is noted for its Meng Lian staircase, carved by a murdered Song Dynasty official’s bodyguard who was attempting to recover his master’s body from the depths of the cliff face. In between the gorges you will also take a tour of the Shennong Stream, a beautiful tributary watercourse taking you past riverside villages and ‘hanging’ wooden coffins lying on buttresses wedged into the cliff face – a precarious burial spot believed to have been used by the Bo people, though scholars are still puzzled as to how the coffins were placed there!

On the final day of your cruise the ship will take you to the Fengdu Ghost City, a strange Taoist complex dedicated to the afterlife. You first glimpse it from the river – a vast cuboid face of the ‘ghost king’ staring out from the side of Ming Mountain. The complex is said to have been founded by two Han dynasty officials who achieved immortality through their devout Taoism – a spiritual backstory slightly at odds with its somewhat eccentric garishness. The whole experience has been likened to walking through an extended haunted house. Whatever you make of it, the topmost level rewards you (on a clear day) with a fine view over the Yangtze and the surrounding hilly farmland. And very occasionally, if the water is low enough, you can even see where the original city of Fengdu stood before it was flooded to make way for the Three Gorge Dam.