Unlock the beauty of the Balkans on a remarkable journey through the ancient history and dramatic landscapes of Albania and North Macedonia. Albania's revival has affirmed its appeal for history-seekers and nature-lovers alike. Traverse stunning mountain scenery, idyllic beaches and glittering lakes dotted with dazzling classical and medieval architecture. 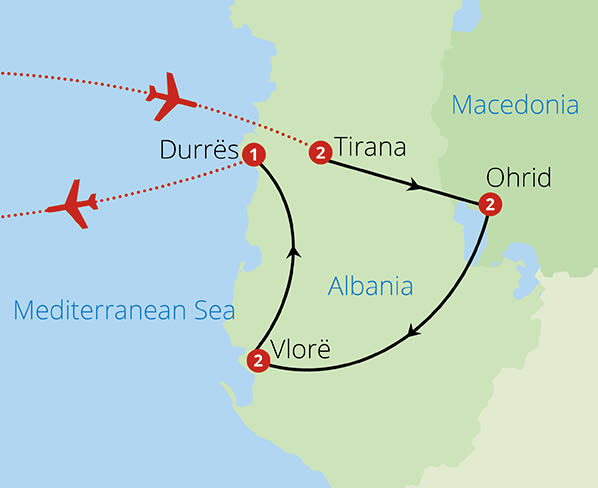 Depart London on your scheduled flight to Tirana. Upon arrival, you will be met by your representatives and transferred to your hotel.

The cultural, entertainment and political heart of Albania lies in the lively city of Tirana, proclaimed as the capital in 1920. Shrouded by its difficult past, Tirana has in recent years reinvented itself as a city of historic and cultural significance; flourishing with its vast array of museums and fascinating monuments, amidst a metropolis peppered with vibrant buildings. Unearth Albania's past struggles as you enter the underground bunker known as Bunk Art 1, built in the 1970s under the strict instructions of Enver Hoxha - Albania's former head of State. Constructed as a protective refuge in the event of a nuclear attack, this five-storey shelter now houses a history museum and contemporary art gallery abounding an assortment of vibrant artwork. Wander through a selection of 24 rooms and be transported to a bygone era, as you witness the living quarters and meeting rooms which replicate its original design. This afternoon, bask in natural splendour as you journey towards Dajti Mountain, a tranquil and refreshing contrast to Tirana. Immersed in an idyllic display of verdant fields and shady beech trees, board a cable car and glide towards the summit of Mount Dajti, absorbing spellbinding vistas along the route. Later this evening, enjoy a welcome dinner at a local winery.

Following breakfast, journey to the picturesque resort which teeters on the shores of Lake Ohrid in North Macedonia. Radiating natural extravagance and exuding old-world charm, indulge in an area of outstanding beauty during an afternoon at leisure, delighting in the opportunity to explore the atmospheric old town of Ohrid, where a scattering of medieval churches, crumbling monasteries and ancient ruins lay adjacent to traditional houses, crowned by their iconic red-tiled roofs. Why not soak up the atmosphere and glorious lakeside views from the comfort of a quaint cafe or take a stroll along the sprawling embankment boardwalk.

Framed by the towering mountainsides of Baba and Nidze, travel to the city of Bitola, a relatively quiet town which boasts an intriguing blend of architecture and captivating archaeological sites. The town has become synonymous with its hospitable coffee-shop culture. Teeming with vibrant 18th-century townhouses, neoclassical buildings and prehistoric monuments, meander through the winding streets of this charming city during a morning tour, before exploring one of North Macedonia's best-regarded archaeological sites. Regally assembled amidst the former city bounds of Macedonia, wander through the excellently preserved monuments of Heraclea Lynecestis which astoundingly dates back to the 4th century; marvel at the ancient Roman baths, open-aired portico and Christian Basilica, before standing upon the striking stage of the Roman Amphitheatre that was, for a short time, the epicentre for Gladiator fights. In the shadows of its ancient past, these mesmerising ruins now serve as a backdrop for concerts and theatre performances, held here during the summer months. From here, spend some time at leisure navigating the market stalls and narrow avenues of the Old Bazaar, before returning to Ohrid this evening.

Return to Albania today and experience the magnetic charm of Berat during a morning city tour. Surrounded by rugged mountains and towering hillsides, witness an iconic assemblage of white Ottoman houses which climb to the highest peak of this 'town of a thousand windows', before exploring the expansive grounds of Berat Castle. Perched atop a steep mountainside, delight in incredible vistas of the city, where the Osum river spectacularly cuts through the verdant valley below. Breaking custom and tradition, this beguiling fortress is unlike any other citadels of its time owing to the fact that it has almost continuously remained a habitable community, where restaurants, markets and Byzantine churches thrive at the heart of local life. Behind the imposing walls of this fortified city, wander through the twisting streets before gaining an insight into one of Albania's most distinctive religious artists at the Onufri Museum. Combining vivid crimson and golden colours in a dazzling spectacle of religious extravagance, witness Onufri's elaborate work before travelling towards the former capital of Albania, idyllically situated on the bay where the Adriatic and Ionian seas harmoniously unite. Spend the rest of the day at leisure basking in the warm Mediterranean sun or relishing in the lively ambience of this picture-perfect seaside metropolis.

Located atop a windswept plateau and set amongst a backdrop teeming with rolling hillsides and verdant olive groves, explore the ancient Greek colonial city of Apollonia. Whilst several ruins remain buried underground, wander around a number of spellbinding archaeological highlights, including the amphitheatre and dominating pillars that marked the city's administrative centre, before returning to the atmospheric centre of Vlore for an afternoon at leisure.

After breakfast, journey towards the charming medieval village of Kruja, blissfully situated at the foothills of Mount Kruja and its surrounding green valleys, which stretch to the shores of the glistening Adriatic. Exuding an enchanting authentic ambience, wander through the cobblestone streets of this quaint town before browsing a collection of beautiful antiques, hand-crafted rugs and masterfully made copper objects which are sold in the ancient Ottoman bazaar, known as one of the oldest market streets in Albania. Later, travel to Durres and arrive in time for your farewell dinner this evening.

This morning, transfer to the airport for your return flight to the UK or chosen extension.

A visa is not required for your trip to Albania. Further advice should be sought from the applicable tourist authority for other nationalities and for general queries. We strongly advise you check your destinations' Tourist Board or Embassy for the most up-to-date guidelines regarding passport validity.

We strongly recommend that you and all members of your party are suitably insured as soon as you book your holiday. It is a condition of booking that you must have suitable travel insurance. It is important that you purchase travel insurance that suitably covers your participation in whatever activities you may undertake at the time that you make your booking. To assist you with this, we have arranged travel insurance in partnership with Holiday Extras. To arrange your travel insurance with Holiday Extras, please call 0800 781 4237 and quote 'WK830' for preferential rates. Please ensure you provide us with the name of your insurer, policy number and their 24 hour emergency contact number as soon as possible. Mercury Holidays will not be liable for any costs incurred by you due to your failure to take out suitable travel insurance from the date of booking.

Your initial flight is to Tirana Airport with British Airways, departing from London Gatwick South Terminal. Your return flight is from Durres Airport with British Airways. Baggage allowance (per person): Each passenger is entitled to 23kg of hold luggage plus 1 item of hand luggage not exceeding 56cm x 35cm x 22cm in size one personal item (such as a handbag or laptop case) not exceeding 43cm x 22cm x 25cm. Weight restrictions will be finalised on your E-ticket receipt. Should you wish to take additional luggage you will need to pay extra at check-in. Check-in should be at least 3 hours before departure. If you wish to arrange Airport car parking or accommodation at preferential rates, we recommend you book this in advance with Holiday Extras on 0871 360 2000, quoting HX313.

It is your responsibility to check any health and vaccination requirements applicable to your booked arrangements. We can only provide general information about this. Health and hygiene facilities and disease risks vary from country to country. You should take health advice about your own needs as early as possible and in good time before your departure. Sources of information include; www.fco.gov.uk, www.travelhealthpro.org.uk, www.hpa.org.uk, your General Practitioner or a specialist clinic.

This tour is accessible to most people with a good level of fitness and normal mobility. It involves climbing steep stairs and getting on and off coaches. This tour is not suitable for anyone with walking difficulties.

This is a fully escorted tour meaning that you will be met by a local guide in each of the cities that you visit, ensuring that you have first-hand knowledge at all times.

You will need to take some extra money with you to cover any dinners where these are not mentioned in your itinerary and personal purchases, such as souvenirs, extra drinks and snacks. Approximately £200-£300 per person should be sufficient for the duration of your tour. Tipping is not compulsory and is at your discretion. We would recommend approximately 3,298ALL (£24.00) per person which is split between the drive and guide. Should you wish to tip, this will be collected by your guide at the end of your tour for your convenience. It is asked that if you do not tip in the local currency, please do not give coins as these are difficult to exchange.