Declared a World Heritage Site in 1991, Dambulla is the largest and best-preserved cave temple complex in Sri Lanka. It has five caves under a vast overhanging rock which towers 160m over the surrounding plains. The caves contain about 150 stunning Buddha statues and paintings, making this one of Sri Lanka’s most important and evocative centres of religious art.

The cave complex is a monastery that is still functional and dates back to the first century BC. The murals cover an area of 2,100 square metres and have been embellished over the last 2,000 years by numerous kings. One of these, King Nissanka Malla, had the caves’ interiors gilded, earning this place the name Ran Giri (‘Golden Rock’).

Access to the caves is along the gentle slope of the Dambulla Rock, offering spectacular views over the surrounding countryside, including Sigiriya Rock 19km away.

Over the entrance to Cave 1 (Cave of the Divine King) is a 1st Century inscription giving an account of the founding of the monastery. The cave is dominated by a 15m reclining Buddha hewn out of the rock. At his feet is Buddha’s favourite pupil Ananda, while at his head is Vishnu, said to have used his divine powers to create the caves.

The largest and most spectacular of the caves is Cave 2, which is 52m wide, 23m deep and up to 7m high. Statues of King Vattagmani Abhaya, who honoured the monastery in the 1st Century BC, and King Nissanka Malla in the 12th Century AD, give the cave its name The Temple of the Great Kings. There are 16 standing and 40 seated statues of Buddha. The cave’s main Buddha statue is under an archway decorated with dragons, and there is also a vessel that collects water, said to have healing powers, that drips from a spring through a crack in the ceiling. 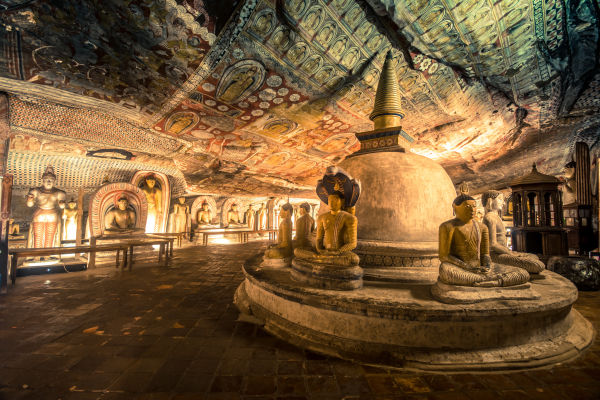 Cave 3, the ‘Great New Temple’, is reputed to have been converted from a storeroom in the 18th Century by King Kirti Rajasinghe of Kandy, a famous Buddhist revivalist. It acquired ceiling and wall paintings in the typical Kandy style and is also filled with 50 Buddha statues plus a statue of the King.

In the relatively small Cave 4, the ‘Western Cave’, the central Buddha figure is seated in a meditative pose with cupped hands. The small dagoba (memorial chest) was broken into by thieves who believed it contained jewellery belonging to Queen Somawathie.

Finally to Cave 5, the ‘Second New Temple’, which is the newest cave which features a reclining Buddha and Hindu deities.

When you enter the cave area you have to remove your shoes. Either put them in your bag or you can leave them for a small fee. It’s advisable to have a pair of socks to protect your feet from the heat. Make sure to have some water and please wear clothes that cover your shoulders and knees. Another thing, beware of monkeys, they are not afraid of grabbing food and even bags!