With its racecourse, golf course, parks and gardens, not to mention its temperate climate, it’s little wonder that Nuwara Eliya is often referred to as ‘Little England’. Indeed the town was founded by an Englishman, Samuel Baker, in the mid 19th Century, as a sanctuary for British Civil Servants and tea planters. In this country retreat in the heart of the tea-growing uplands, they could immerse themselves in pastimes such as fox hunting, deer hunting, polo, golf and cricket.

Today the town and surrounding scenic hills attract local and foreign visitors alike. In the town you can wallow in colonial nostalgia, surrounded by buildings such as the Queen’s Cottage, the General’s House, Grand Hotel, the Hill Club, St Andrew’s Hotel and the Town Post Office. The verdant surrounding countryside of tea plantations, carefully tended vegetable plots and craggy hills adds to the sense of an idyllic wonderland.

It’s worth spending some time in the lush 27 acres of Victoria Park, especially if you’re a keen birdwatcher. Look out for species such as the Indian Blue Robin, the Pied Thrush and the Kashmir Flycatcher. There is boating and fishing to be enjoyed on Lake Gregory, which is also close to the Racecourse and the superb 18-hole Golf Course. A path from the racecourse leads up to Single Tree Mountain, from where you have spectacular views of the entire town and the surrounding hills.

Perched on the very edge of the hill country between Nuwara Eliya and Haputale, another country retreat is Horton Plains National Park. This wild stretch of bleak grassland on a plateau 2,000 feet above sea level is a paradise for bird watchers, nature lovers and hikers. As a UNESCO World Heritage Site, Horton Plains is a world apart from the rest of Sri Lanka – a misty landscape with its own microclimate and fragile ecosystem. Large parts of the plains are still covered in swathes of cloud forest, with their distinctive umbrella-shaped Keena trees covered in fine cobweb and leaves that go through astonishing colour changes as the seasons progress. 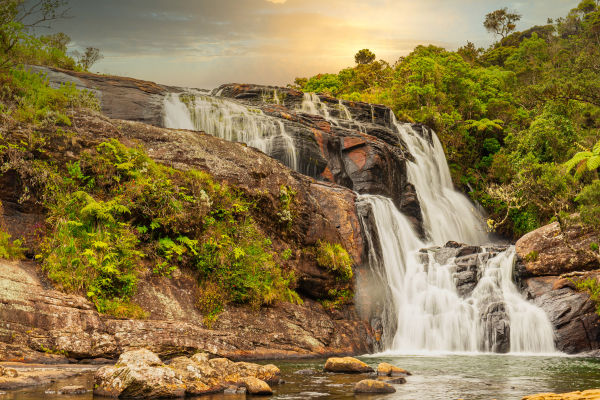 An unmissable feature of the Plains is the famous World’s End, where the escarpment falls in a sheer drop of nearly a kilometre to the lowlands below. On seeing such a sight it’s no surprise to learn that the Plains are also the source of three of Sri Lanka’s largest rivers.

10km south-west of Nuwara Eliya, sprawling at the base of Hakgala Rock, are the Hakgala Botanical Gardens. They were originally established to grow Cinchona, the source of the anti-malarial drug Quinine, but soon became host to a wide array of foreign species. Highlights include a fine rose garden, a Japanese garden, an orchid collection, cedars and giant cypresses.

Incidentally, the gardens grow on the rock called Hakgala, which means ‘Jaw Rock’. How did it acquire that name? Well, legend has it that Hanuman, the monkey god, was sent by Rama to the Himalayas to find a particular medicinal herb. He forgot which herb he was looking for and decided to bring a chunk of the Himalayas back in his jaw, hoping the herb was growing on it.