Udawalawe National Park was created in the early 1970s to provide a sanctuary for wild animals displaced by the construction of the Udawalawe reservoir on the Walawe river, as well as to protect the catchment area for the reservoir. It has developed into one of Sri Lanka’s most popular national parks, mainly due to its large and easily spotted population of elephants. It is, without doubt, the best place on the island to see pachyderms in the wild.

Most of Udawalawe lies within Sri Lanka’s dry zone and its terrain is flat and denuded with extensive areas of grassland and low scrub, largely the result of previous slash & burn farming before it became a national park. But the lack of forest cover makes it easier to spot wildlife than in any other Sri Lankan park. And the whole place transforms magically after rain, when temporary lagoons form around the reservoir, downing trees and turning the floodplains an intense verdant green.

Needless to say, the vast majority of visitors to the park come to catch sight of the magnificent giant of the animal kingdom, the elephant. There are usually about six hundred elephants in the park, mostly attracted by the Udawalawe reservoir. They are free to migrate along an elephant corridor between Udawalawe and Lunugamvehera National Park, though most stay here. 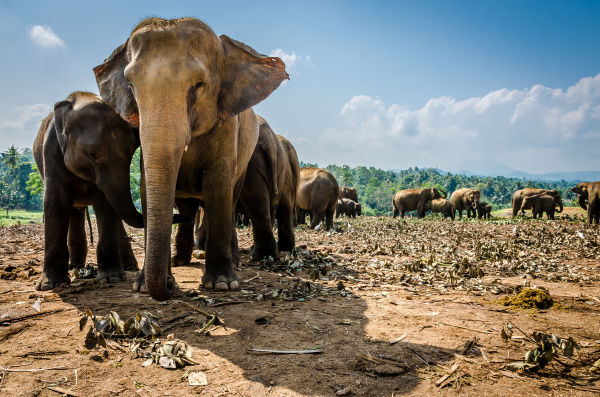 A different way to see elephants is at the Elephant Transit Home, more commonly known as the “Elephant Orphanage”. It was established in 1995 to look after abandoned elephant calves within the park. They are bottle-fed milk until the age of 3½ when they move on to a diet of grass. At the age of five, most are released into the national park, while a few have been donated to important temples.

It’s not just about Elephants

There are also hundreds of buffaloes, together with macaque and langur monkeys, spotted and sambhur deer, and even crocodiles. If you’re very lucky you may even catch a glimpse of leopards, giant flying squirrels, jungle cats, sloth bears and porcupines.

Udawalawe is also a good bird watching site, including endemic species such as Spurfowl, Malkoha, Hornbill, Babbler and Junglefowl. A variety of aquatic birds visit the reservoir, including the unmistakable Lesser Adjutant, standing at well over a metre tall. The open parkland attracts birds of prey including a variety of eagles.

Don’t just take our word for it

“We went to see elephants, and elephants we saw. Loads and loads of them. We were exceptionally lucky to get to see the leopard, he was only maybe 500 yards away in a clearing so we got a good look at the magnificence of him. My favourite memory is sitting in the jeep at sunset surrounded by about 80 elephants of all ages and sizes peacefully grazing and babies playing at the water's edge. There is a lot of wildlife to see and I would definitely go back.”