What many consider to be the most beautiful building in the world attracts millions of visitors. Few come away disappointed. The Taj Mahal really does have to be seen to be believed. It is actually a mausoleum, built by Shah Jahan, the fifth of the Great Mughals, as a memorial for his third wife, Mumtaz Mahal, who died giving birth to their fourteenth child in 1631. The emperor was devastated by her death at the age of 39 and went into mourning for two years. He turned away from the business of running the empire and dedicated himself to architecture, resolving to build his wife the most magnificent memorial on earth.

How long did it take to build?

It took 22 years to complete, employing a workforce of 20,000 and a fleet of 1000 elephants for transport. The white marble that gives the Taj its breathtaking luminescence was carried some 300km from quarries in Rajasthan. Semi-precious stones came from far and wide – onyx, amethyst, lapis lazuli, turquoise, jade, crystal, coral and mother-of-pearl. The logistics alone are astonishing enough, but nothing prepares you for the sight that greets you once past the gates. The shimmering beauty, the perfect symmetry, the wonderful proportions and the sheer scale that’s impossible to imagine from images. And then there’s the exquisite detail covering every inch of marble using a technique called pietra dura which came either from Italy or Persia. And don’t miss the amazing calligraphy, inlaid with black marble, which carefully increases in size as it goes higher, so the letters appear to be the same size from wherever they’re viewed – an optical illusion of perfectly balanced typography. 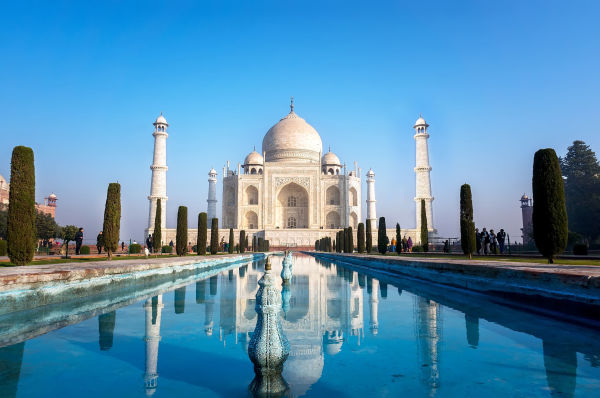 Make a visit whilst you still can...

It is often said that words cannot describe the Taj Mahal, so we’ll leave our efforts there and let you see it with your own eyes. And who knows for how much longer this unique wonder will be available for people to experience? The sad reality is that the Taj is under threat from traffic and industrial pollution, its white marble beginning to lose its luminescence through a “cancer” caused by Sulphur Dioxide. In the past, cleaning work has rectified the problem to some extent, but it’s feared that the chemicals used will themselves eventually damage the marble. So let’s hope for three outcomes. One, that a new cleaning technique using a non-corrosive clay, rather like a giant face-pack, will prove successful. Two, that the government properly enforces effective pollution control measures. Thirdly, if the first two steps work out well, talk of closing the Taj Mahal to the public will go away and it will remain in all its glory for the world to see at close quarters.

And that, ironically, is something that was denied to its creator, Shah Jahan. Not long after it was finished, he was overthrown by his son Aurangzeb and imprisoned in Agra Fort (Red Fort). For the next eight years until his death, he could only gaze out at his creation through a distant window. At least, after he died in 1666, Shah Jahan was entombed in the Taj Mahal alongside his beloved Mumtaz.

Spiritual India with Agra and the Taj Mahal Extension