Our fascinating tour offers a fabulous insight to Patagonia, combining two of South Americas most famous cities, cosmopolitan Santiago with the elegant and vibrant Buenos Aires. Travel through the delightful colonial city of Valparaiso and the contrasting city of 'the Garden city' Vina del Mar. Enjoy a once in a lifetime experience of sailing through magnificent glaciers, possibly spotting dolphins and seals and delight at the dominance of the stunning icebergs. 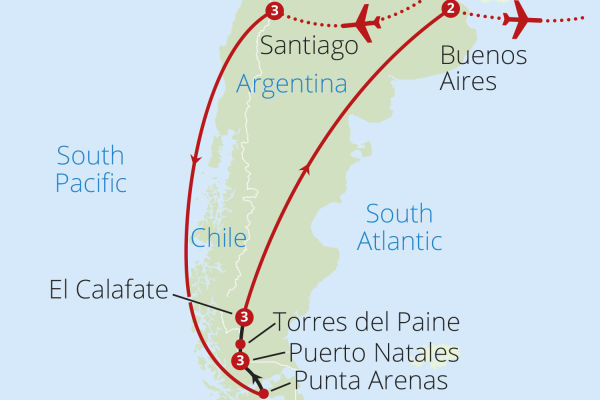 Depart London on your scheduled, overnight flight to Santiago, via Sao Paulo.

On arrival in Chile, you will be met and transferred to your hotel for check-in. In the afternoon commence your tour of vibrant Santiago. Set against a spectacular backdrop of snow-covered Andean peaks this tour takes you to the city's historic heart, visiting beautiful baroque buildings and the provincial Santa Lucia Hill where Spanish conquistadors founded the city in the 16th century.

Following breakfast, today is a tale of two cities. Valparaiso is a colonial city presenting an excellent example of late 19th century urban and architectural development in Latin America, considered a World Heritage site by UNESCO. Enjoy a ride on a traditional cable car and delight in the outstanding colours of the cliff top homes, bohemian culture and outstanding sea views. Continue to the coastal city of Vina Del Mar, a sharp contrast to neighbouring Valparaiso, known as the 'Garden City', a fascinating and beautiful location where you will enjoy delightfully expansive parks, fabulous architecture and the crystal-clear waters of the Pacific Ocean. There will be an opportunity to visit La Sebastiana museum at an additional fee, famous for inspiring the Chilean Poet Pablo Neruda.

Today is at leisure for you to explore the energetic and cosmopolitan city of Santiago at your own pace. An optional excursion to the renowned vineyard of Santa Rica will be available.

Following breakfast transfer to Santiago airport for your flight to Punta Arenas. On arrival, you will be met and enjoy a tour of the small isolated city of Punta Arenas. Continue to Puerto Natales, gateway to Parque Nacional Torres del Paine. This quaint town is situated on the shore of the Sound of Ultima Esperanza, once you have checked in to your hotel the rest of the day is at your leisure.

Today you will board a ship to sail the Channel of Last Hope, marvel at the awe-inspiring glaciers which sharply pierce the ocean from the southern continental ice field. Enjoy the stunning views as you sail past the famous Heritage Building, a slaughterhouse dating back to 1913 before continuing through the Senorat canal. Hopefully, you will catch sight of the Magellan Dolphins, frequent visitors to this area and possibly as a graceful sea lion whilst admiring the Condor birds by a stunning waterfall. You will then disembark for a stroll towards the Serrano glacier along the shores of Tempanos Lagoon and through a native forest, the huge icebergs and amazing landscapes complete an unforgettable day.

Considered the highlight of your trip, the National Park Torres del Paine is quite simply spectacular, internationally recognised as one of the most unique and beautiful places on the planet. Known for its soaring mountains, lakes, waterfalls and stunning blue icebergs that slice the glaciers and grasslands whilst sheltering rare wildlife such as guanacos. The three granite peaks of the Pane mountain range which dominate the landscape of the park spectacularly extend up to 2,500 metres above sea level. Following your lunch, you will embark on a short hike to the Grey Lake to witness the many icebergs originating from the Grey Glacier.

After breakfast, you will begin your journey to Argentina stopping for lunch en route. On arrival, you will be met by your local representative to check in at your hotel in El Calafate, the gateway to the Perito Moreno Glacier.

The Perito Moreno Glacier is known locally as the 8th Wonder of the World is the planet's 3rd largest reserve of fresh water and one of the continent's last advancing glaciers. Your full day tour will leave you in awe of the glaciers unfathomable beauty. Calving icebergs the size of skyscrapers you may witness the glaciers signature movement as they slowly detach.

Full day at leisure in El Calafate to relax and unwind.

Following breakfast transfer to the airport for your flight to the vibrant city of Buenos Aires. You will be met and transferred to your hotel. Evening at leisure.

Enjoy a morning city tour commencing in the historic Plaza de Mayo, the site of the 1810 revolution and now a hub of political life. From here you will see the Casa Rosada government palace and its famous balcony where Eva Peron used to address the people. Continue to the picturesque and colourful neighbourhood of La Boca with its famous street 'Caminito' whose architecture reflects the European influence of the late 19th century. In the evening marvel at a traditional tango, show whilst enjoying dinner. Tango originated in the 1880 ghettos which were populated by Italian and Spanish immigrants, Africans and Gauchos. From this intersection rose the 'Comrpraditos', whose songs, lyrics, and dances reflect 'el duelo de cuchilleros', or knife fights characteristic of the social ambience. The tango rose from a mix of Cuban and Spanish rhythms, some polka, and according to some, also a bit of African music.

Transfer from your hotel to Buenos Aires Airport in time for your flight back to the UK via Sao Paulo, or continue on to your chosen extension.

The Sierra Nevada Hotel in El Calafate was not good. The hotel was noisy some internal but a lot of external noise. Motorcycles revving up and backfiring. Loud music playing at 3am, 5am. Breakfast very basic.

All as expected. Breakfast at Kenton Palace not as good as other hotels.

This holiday was my 3rd long haul with Mercury and i was not disappointed. This was an excellent and interesting holiday with many highlights. The Tango show with dinner in Buenos Aires was a first class evening excursion. The extension to Iguazu Falls was a good way to finish the holiday and good value.

All Hotels used were of good standard with reasonably priced food. Rooms good size and all very much better than we had anticipated

British citizens currently do not need a tourist visa to enter Chile and Argentina. Visa requirements are subject to change and obtaining a visa is the responsibility of the traveller and not Mercury Holidays. We recommend you check with your destinations' Tourist Board or Embassy prior to departure for the most up to date guidelines regarding these.

It is your responsibility to check any health and vaccination requirements applicable to your booked arrangements. We can only provide general information about this. Health and hygiene facilities and disease risks vary from country to country. You should take health advice about your own needs as early as possible and in good time before your departure. Sources of information include; www.fco.gov.uk, www.travelhealthpro.org.uk/, www.hpa.org.uk, your General Practitioner or a specialist clinic.

This tour is accessible to most people with an average level of fitness and normal mobility. It involves moderate days of walking on uneven paths and small hills and getting on and off coaches and boats. This tour is not suitable for anyone with walking difficulties.

The minimum number of travellers in your group will be 10, and the maximum will be 35. If in the unlikely event there are less than 10 people booked on your tour date, we will endeavour to reduce any disruption to your holiday and try to operate your tour with lower passenger numbers. If we are not able to operate your departure date then you may be asked to change to a different date and a full refund will be made available to you should this alternative not be suitable.

This is an escorted tour, meaning the you will have the services of an English-speaking guide during each excursion ensuring that you have first-hand knowledge at all times.

You will need to take some extra money with you to cover any meals where these are not mentioned on your itinerary and personal purchases, such as souvenirs, drinks and snacks. Approximately (£500-600) per person should be sufficient for the duration of your tour. Please also bear in mind that there will be several shopping opportunities throughout your tour. Tipping is at your discretion; however we would recommend approximately ($3.00-5.00) per day. Tips are accepted in the local currency, however it is asked that if you do not tip in the local currency that you only pay with notes, as coins cannot be exchanged. As normal practice you may be asked for your credit card details on check-in at the hotel in order to cover any extras incurred during your stay. If you do not have a credit card, you may be asked for a cash deposit. American Express, Diners Club, MasterCard and Visa are widely accepted in hotels.