Deserts are sometimes defined as environments that receive less than 250mm of rain in a year. The Atacama gets less than 1mm. Welcome to the driest place on Earth (apart from the poles). Words such as ‘moonscape’, ‘otherworldly’ and ‘weird’ crop up frequently in descriptions of the Atacama Desert. ‘Beautiful’ and ‘inspiring’ are two more, with wind-sculpted canyons, salt lakes, smoking volcanoes and bubbling geysers providing a backdrop that is like something out of science fiction.

In the middle of all this, at an altitude of nearly 8,000ft, lies the Spanish colonial town of San Pedro de Atacama, the ideal base for exploring this extraordinary region. Surrounded by an oasis, what was once a small quartz and copper mining town has evolved with tourism while retaining a quaint, unhurried charm and agreeable, adobe-brick appearance. This area was the centre of Atacama Indian culture, and the bone-dry climate has preserved archaeological relics such as the nearby ancient village of Tulor, estimated to have been built around 800 BC.

The most popular excursion -

Of the many excursions into the desert beyond San Pedro, probably the most popular is a visit to the Tatio Geysers – despite the need to set off before dawn to catch the display at its most spectacular! The early start brings a breathtaking reward at the world’s highest geothermal field, as thick plumes of a steam blow from some eighty gurgling geysers, the cold morning air ramping up the spectacle. Between the geysers, bubbling pools encrusted with colourful minerals hiss and splutter. It feels like being on another planet, so it can come as a surprise to see herds of vicunas, the smallest camelid, roaming nearby – but there’s a good chance that you will. 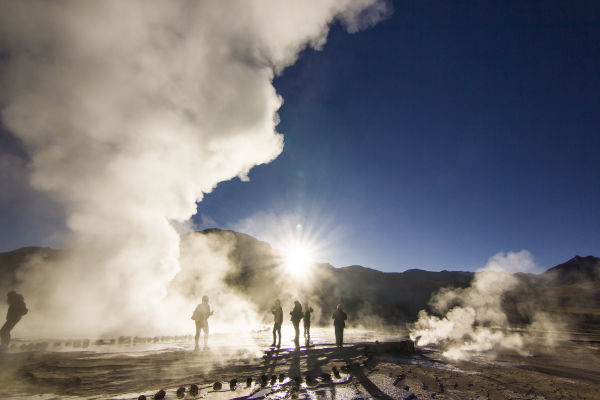 After this visual feast at sunrise, the perfect way to top and tail the day is a sunset visit to the Valle de la Luna (Valley of the Moon)on the way back to San Pedro. The valley is a depression surrounded by jagged spines of salt-encrusted hills, with an immense sand dune running between two ridges. The name of the place is self-explanatory, and a short walk to a perfectly located lookout point brings an awe-inspiring sight as the sun goes down. Seeing the colours melt from violet to gold across this surreal landscape is an unforgettable experience.

A full day tour in a 4x4 Jeep into the Eduardo Avaroa National Reserve, across the border in the south-west corner of Bolivia. Created in 1973 primarily to protect the indigenous flamingos and vicuna, this high plains environment is a mind-boggling mix of weird rock formations, salt flats, colourful lagoons, hot springs and semi-active volcanoes. A day trip into this Salvador Dali-esque world will start with a visit to the amazing Laguna Verde (Green Lagoon) at the foot of the Licancabur volcano. Sediments containing copper minerals give the water its extraordinary emerald colour. Next stop is the Polques Hot Spring which offers the novel opportunity to bathe al fresco in the warm thermal waters while the outside temperature is below freezing! The final unmissable sight before returning to San Pedro is the Geyser Sol de Manana. With red rocks, subterranean rumblings and spouting plumes of steam you might think you’ve landed on Mars. The experience is out of this world in more ways than one.

Chile From Top to Toe