Say the words “Easter Island” and one image is sure to spring to mind – the stern-faced, square-jawed statues staring mournfully towards the vast ocean all around. These are the moai, the mystical, mysterious sculptures that stand like mute sentinels on one of the remotest places on earth. The stone blocks, carved into head-and-torso figures, vary in size but average about 13 feet tall and 14 tons in weight. There are nearly a thousand of them scattered around the island.

Welcome to Rapa Nui (the local name), the most isolated inhabited island in the world. The name Easter Island comes from its discovery by Dutch explorers on Easter Sunday in 1722. Can you imagine their bewilderment on seeing these bizarre creations on this remote spot more than two thousand miles from mainland Chile? But everything about this weird and wonderful place is difficult to get your head around. 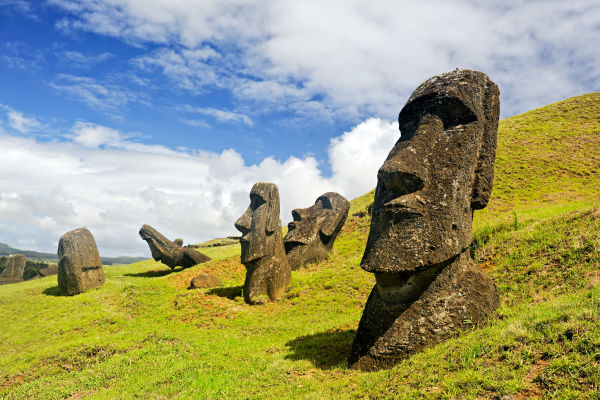 For starters, the navigational feat of getting here in the first place, a journey made by Polynesians in wooden outrigger canoes to this tiny speck in the vastness of the Pacific Ocean. According to the most recent studies, this happened sometime around the 8th century, when King Hotu Matu’a came here with his extended family, probably from the Pitcairn Islands (a mere 1,290 miles away).

The population grew and culture flourished, characterised by a written language and the megalithic art and petroglyphs which have survived over a thousand years. Alas, the society did not fare so well, virtually destroying itself through a combination of deforestation, soil erosion, population growth, and eventual civil strife and starvation. The slave trade and plantation exploiters didn’t help matters, neither did Catholic missionaries who destroyed much of the cultural art and crucially, their written records. Nevertheless, the Rapa Nui people were not wiped out, and Chile annexed the island in 1888. Today it is home to some 5,000 people, virtually all of them living in the island’s only settlement, Hanga Roa. Most islanders make their living from tourism, which has been growing steadily since an airstrip was built in 1968.

Seeing the iconic moai statues at close quarters is an obvious highlight, and it makes you wonder just how these colossal sculptures were created and transported all over the island. They originated in the Rano Raraku Quarry, carved directly from compacted volcanic ash and then carried, it is assumed, on sleds to their platforms known as ahus. The biggest of these is the 200 metre long Asu Tongariki, on which fifteen huge moai statues are lined up facing inland. In 1960 a tsunami uprooted and damaged the whole edifice, which lay neglected and partly ruined until restoration efforts eventually came to fruition in 1995.

There’s more to Easter Island than statues. One of the most stunning sights is the huge crater of the extinct volcano Rano Kau, offering spectacular views over the entire island and out to the ocean beyond. Nearby is the ceremonial village of Orongo, where nominated competitors once set off down perilous cliffs and across shark-infested waters in a race to retrieve a bird’s egg from a neighboring islet. The winner received the title of the “Birdman”, earning special privileges for him and his family.

When you’re done with statues, sights and ceremonies, relax and feel the white sand between your toes on the fabulous Anakena Beach, a paradise for snorkelers and surfers where the waters are crystal clear and the palm trees sway in the breeze.