Located on the southern frontier of South America, Patagonia is the epitome of undisturbed elegance and awe-inspiring natural splendour. Spanning over 1 million square kilometres across the lowermost regions of Argentina and Chile, this shared territory benefits immensely from its sparse population, comprising of just under 2 million inhabitants, and relishes as a home of unique diversity. From its piercing ice fields, maze-like Fjords and towering snow-capped Andean peaks, to the expansive steppe-like plains and verdant meadows, Patagonia is a playground of adventure and is a nature lover’s paradise.

What is Patagonia known for?

Patagonia is quite simply a spectacle of nature at its finest. Undisturbed sceneries comprising of deciduous vegetation, dense scrubland forests and glistening lakes stretch as far as the eye can see which offer invaluable shelter for endemic fauna. Famed for its thriving population of herons, Sparrow hawk and Chimango Caracara, Patagonia also houses the world’s largest colony of charismatic Magellanic penguins and is renowned for its sizeable herds of Guanacos. 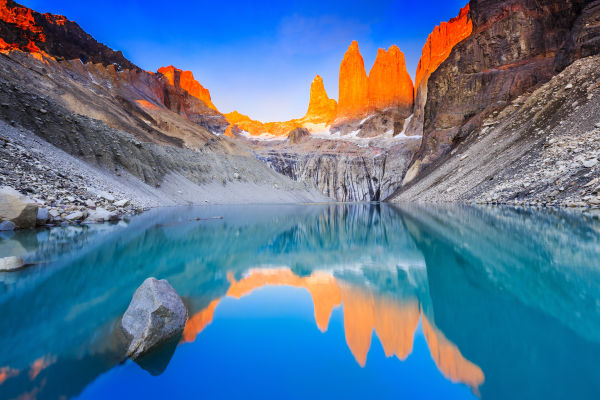 What are Patagonia’s best features?

A wonderland of unfathomable splendour, Patagonia’s beauty extends across its entire length. Known locally as the 8th Wonder of the World, the Perito Moreno Glacier is just one of the region’s awe-inspiring highlights. Comprising of imposing icebergs the size of skyscrapers, the Perito Moreno Glacier is the planet’s 3rd largest reserve of freshwater and is one of the world’s only glaciers which continues to grow, sometimes moving up to 2 metres per day! Further South, the Torres del Paine National Park is another area of sublime beauty; flanked by soaring mountainsides, with icebergs that slice through its glaciers, it is quite simply breath-taking. Positioned perfectly for sunrise, the iconic peaks of The Torres become flooded by a red reflection as the first rays of sunlight hit the top of the rockface, a truly majestic showcase.

Dating back as far as 8,000 BCE, Patagonia emerged as the home to only small clusters of indigenous communities who lived a nomadic life. An intriguing example of Patagonia’s earliest inhabitants can be found at La Cueva de Manos (the Cave of Hands), a site in which historians believe to have been last inhabited in around 700 A.D Stencilled handprints of the Tehuelche people’s ancestors adorn the walls, boasting a 14,000 year-long history, before this spectacular territory was officially discovered in 1530, by the explorer Ferdinand Magellan.

On their arrival, Spanish conquistadors discovered small tribes of native residents, believed to have been Tehuelches; with statures larger than most Europeans, Ferdinand Magellan described these ‘native giants’ as ‘Patagons’, which, of course, is where the name Patagonia derived from. A territory often described as the ‘Land of Giants’, this fitting name truly epitomises its overwhelming magnitude of natural beauty. Although discovered in the 16th century, the nations of Chile and Argentina only began to colonise Patagonia in the 19th and 20th century, where indigenous populations began to dwindle and make way for the European, Argentine and Chilean mix we see today.