Vina Del Mar is a classic beach resort on Chile’s west coast, with a beguiling mix of white sandy beaches, palm-lined boulevards, colonial buildings, swanky hotels, gourmet restaurants and a sumptuous casino. It has long been a favourite getaway destination for well-to-do Santiaguinas and more recently has become a chillax of choice for holidaymakers worldwide. Geographically it’s not far away from bohemian Valparaiso, but with its neat and tidy streets, manicured parks and grandiose palacios, it’s a million miles apart.

More than just a sandy beach

During the day you might want to do little more than unwind and recharge the batteries on one of the fabulous beaches, just a short stroll away from your hotel. However, if you’re a little more inquisitive, there’s plenty more to see and do. You could start by discovering why Vina del Mar is also referred to as the “Garden City” ; it’s a place with many beautiful parks, but the one which most justifies the nickname is the magnificently landscaped Parque Quinta Vergara. The quinta was the residence of the Vergara family who founded the city, and this immaculate park was the garden surrounding their Venetian style Palacio. The house itself, which houses a museum of fine arts, is just one of the city’s many architectural delights that hark back to an age of old-world opulence. On Quillota Street there’s the French-style Palacio Rioja, a mansion built for the wealthy banker Fernando Rioja in 1906. 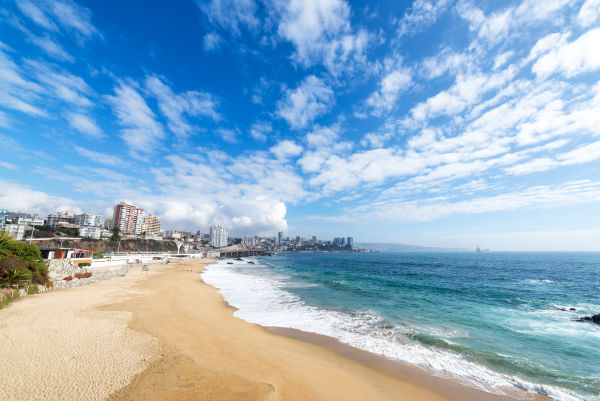 Another major draw is the Cerro Castillo (Castle Hill), where you’ll find magnificent mansions, wonderful views of the city and also the Castillo Presidencial, the summer palace of the President of Chile. The city’s famous casino, which is in the same league as some of the world’s most renowned, was designed in the art deco style and also boasts lavish gardens. But perhaps the most iconic building is the Castillo Wulff, built by a prominent Valparaiso businessman and philanthropist named Don Gustavo Wulff Mowle in 1906. Designed on two floors, it hangs out over the sea, and in one section you can view the rocks and waves below through a thick glass floor.

There are some excellent museums too. Foremost among these is the Fonck Museum (Museo de Arqueologia e Historia Francisco Fonck), A clue as to some of the artefacts inside is given away by the original moai (Easter Island statue) standing guard outside. There are some fascinating archaeological finds from Easter Island, along with Araucanian silverware and pre-Columbian ceramics. And if you like your museums to be old-school, upstairs you’ll find some natural history exhibits such as fossil and mineral samples, preserved insects in glass cases and stuffed animals.

When you’ve had your fill of culture and your stomach is demanding some nourishment, your spoilt for choice for cuisine in Vina del Mar – particularly if you’re a fan of seafood. From high-end fine dining restaurants to beachfront ceviche stalls, the fruits of the sea are available on every level from simple to sophisticated.

Oh and there’s one final thing to tick off before you can really call yourself a tourist in Vina del Mar – taking a selfie by the famous flower clock. Whether you regard it as quirky or just plain cheesy, there’s no denying the Reloj de Flores is one of Vina’s most photographed features. Since 1962 its Swiss-made hands have been chiming on every hour as they pass over a colourful bed of flowers. Definitely one for the folks back home!