Relax for 4-nights at the Red Sea resort of Aqaba, on Jordan's southern coastline. A popular beach resort this town has a relaxed atmosphere and is famed for its diving opportunities. 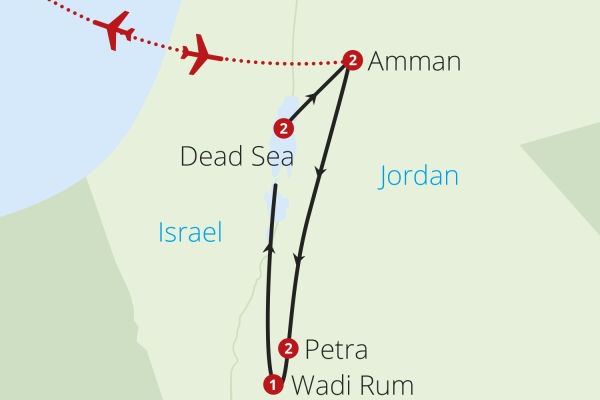 This map is for the main tour only

Depart London on your scheduled direct flight to Amman where you will be met and transferred to your hotel.

A morning tour of Amman's historic downtown area takes in the cultural artefacts of the Archaeological and Folklore Museums and the hilltop ruins of the Citadel which sits on the highest hill in Amman, about 850m above sea level. Occupied since the Bronze Age, it is surrounded by a vast 1700m metre long wall which has been re-built numerous times throughout the Bronze and Iron Ages, as well as the Roman, Byzantine and Umayyad periods. Two of the Citadel's most fascinating sights are the Umayyad Palace, renowned for its distinctive domed entrance known as the chamber, and the towering columns of the Temple of Hercules, believed to be the most significant structure in the historic Amman Citadel. Continue on to the ancient city of Jerash, one of the ten great Roman cities of the Decapolis League with a history of an unbroken chain of human occupation dating back more than 6,500 years. Hidden for centuries in sand, the city offers a wealth of wellpreserved Roman ruins. Witness its long-standing theatres, paved and colonnaded streets, soaring hilltop temples, and spacious public squares and plazas before returning to your hotel in Amman.

This morning, set out for the city of Madaba, famous for its 6th century map of Jerusalem and the Holy Land, as well as its spectacular Byzantine and Umayyad mosaics, some of which are vibrantly colourful.Travel onward to Mount Nebo, renowned as the biblical city where Moses having led his people from Sinai, stood on the edge of a ridge overlooking the dead sea, and was granted a view of the 'Promised Land' that he would never enter. It is also said that he died and was buried here. In the basilica that marks the spot, beautiful mosaics portray rustic scenes which are as varied with colour as the day they were laid. From here, journey south to explore Al Karak's imposing 12th century crusader's castle, built on a triangular plateau and an impressive example of the Crusaders' architectural military genius before continuing to Petra for your overnight stay.

Today's exploration of the awe-inspiring Nabatean Red Rose city of Petra starts with a dramatic entry through a long, narrow gorge flanked by soaring cliffs. This unique city, one of the 7 New Wonders of the World and a UNESCO Heritage site, was carved into the sheer rock face by the Nabataeans, an industrious Arab people, who turned it into an important junction for the silk, spice and other trade routes that linked China, India and southern Arabia with Syria, Greece, Egypt and Rome. Colossal red mountains and vast tombs of a departed race which are such a far reach from modern civilization, are often considered as one of the greatest wonders ever wrought by Man and Nature. Pass dazzling rock formations before the final turn opens up to a view of the iconic 2,000-year-old facade of the treasury. Believed to be a royal tomb, the impressive rock-hewn site may be recognised from the film 'Indiana Jones and the Last Crusade'. Continuing deeper into this fascinating ancient city, you'll have a full day to explore its elaborate, tombs, temples, sacrificial altars and Roman-style theatres.

After breakfast, visit Al Beidha, known as 'Little Petra' for the similarity of its rock-cut tombs and structures. Witness centuries-old dining halls, washrooms, fountains and rooms skilfully hewn into stone. Next, travel further south to the undulating desert dunes of Wadi Rum where you'll embark on a scenic jeep safari. Described by T.E Lawrence as 'vast, echoing and godlike', the locals refer to the untamed sea of red sand as the 'Valley of the Moon'. In a land where the sun beams over imposing rock formations, breath-taking crimson mountains and carpets of untouched sand dunes, soak in awe-inspiring vistas in this otherworldly territory. In the midst of this ethereal kingdom, enjoy a unique overnight stay in an authentic desert camp.

Transfer from Wadi Rum to the Dead Sea and spend the rest of your day at leisure, providing the perfect opportunity for relaxation. Alternatively, take a trip to the shores of the iconic Dead Sea in the Jordan Rift Valley. Submerged at a dramatic 400 metres below sea level, the lowest point on the face of the earth, this vast stretch of water is 304 metres deep and is renowned as the deepest hypersaline lake in the world; by the time the waters reach the Dead Sea, they are land-locked, resulting in evaporation which leaves behind a dense cocktail of salts and minerals. A fascinating phenomenon occurs here where you can float on the salty waters and also cover yourself in its rejuvenating black mud, making for

After breakfast, transfer to the airport for your flight to Aqaba in the south of Jordan, upon arrival transfer to your hotel and check-in.

These days are yours to spend spent at leisure relaxing on the Aqaba's beaches and enjoying the warm waters of the Red Sea.

After breakfast, depart your hotel for the airport where you'll board your return flight to the UK via Amman.

The hotels listed below are provided for guidance only and final confirmation of your accommodation will be sent to you approximately 90 days before you travel
Kempinski Aqaba
3 nights
Aqaba, Jordan
More details
Geresa Hotel
2 nights
Amman, Jordan
More details
View More

Our guide Ashraf was excellent with great knowledge of the history of his country.

All hotels were clean and comfortable as expected

A visa is required for your trip to Jordan. For UK Nationals, the Jordanian Government has waived visa fees for travellers staying a minimum of two consecutive nights. Our representative in Jordan will apply for this visa on your behalf, therefore, please ensure that you have sent a copy of your passport page to our team at least 60 days prior to departure. Failure to receive this in the given time will mean that we are unable to apply for a visa on your behalf, and you will need to obtain your own visa. You can get a single-entry visa valid for 1 month on arrival at the airports or the Sheikh Hussein/North Border crossing at the Jordan/Israel border. Further advice should be sought from the applicable tourist authority for other nationalities and for general queries. We strongly advise you check your destinations' Tourist Board or Embassy for the most up-to-date guidelines regarding passport validity.

Previous travel to Israel Evidence of a previous visit to Israel like an Israeli entry/exit stamp in your passport does not normally cause any difficulties when entering Jordan. It is, however, for the Jordanian authorities to determine the right of entry into the country. If you have any concerns, you should contact the Consulate of the Hashemite Kingdom of Jordan in London.

It is your responsibility to check any health and vaccination requirements applicable to your booked arrangements. We can only provide general information about this. Health and hygiene facilities and disease risks vary from country to country. You should take health advice about your own needs as early as possible and in good time before your departure. Sources of information include; www.fco.gov.uk, www.travelhealthpro.org.uk, www.hpa.org.uk, your General Practitioner or a specialist clinic.

This tour is accessible to most people with an average level of fitness and normal mobility. It involves moderate days of walking on uneven paths and small hills and getting on and off coaches. This tour is not suitable for anyone with walking difficulties.

The minimum number of travellers in your group will be 10, and the maximum will be 40. If in the unlikely event there are less than 10 people booked on your tour date, we will endeavour to reduce any disruption to your holiday and try to operate your tour with lower passenger numbers. If we are not able to operate your departure date, then you may be asked to change to a different date and a full refund will be made available to you should this alternative not be suitable.

The currency in Jordan is the Jordanian Dinar, known as JOD, but US Dollars are also widely accepted in the major cities. Cash machines will also be available throughout the tour in order to withdraw money in the local currency.

You will need to take money with you to cover any personal purchases such as souvenirs, laundry and extra drinks and snacks. Approximately £200-£300 per person will be sufficient for the duration of the tour. Tipping is common practice in Jordan and it is customary to tip your driver £1.50 and guide around £3.00 per day and the airport representative £1.50. Tips for the driver and guide can be given at the end of the tour for your convenience. Tips can be given in any currency you have.